1. Does The Mtn. stream games via the Internet?

No. The Mtn. does not have the rights to stream live game and other programming over the internet and is precluded from doing so due to contractual obligations with cable and satellite service providers.

2. Can I get a DVD copy of a specific game or show that aired on The Mtn.?

No. The Mtn. Store ceased taking orders on April 28 and is no longer able to provide copies of shows and games

3. I'm having difficulty viewing some of the game elements on my screen.  How can I fix this?

Most high-definition televisions have selectable viewing modes, or aspects.  If the score box is going off your screen, then your HDTV is probably set to Zoom Mode, which zooms in on the native 4:3 picture to fill the 16:9 screen inherent to HDTVs. This is cropping the score box and lowering the picture quality. For optimal viewing of a standard definition (SD) channel in its native 4:3 aspect, your HDTV should be set to Normal Mode.  4:3 Aspect and Natural are other modes that could appear in your menu. Please refer to your HDTV owner's manual for more information regarding the viewing modes for your HDTV,

Normal (4:3, Natural) Mode: will display a 4:3 ratio, leaving black borders on the two sides of the screen. This is the optimal viewing setting for a SD channel.

Full Mode: will stretch the 4:3 aspect ratio horizontally so that it fills the complete 16:9 ratio screen. This will distort a 4:3 picture by stretching it.

Zoom Mode: will zoom in on the 4:3 aspect ratio screen area to fill the complete 16:9 ratio screen. This will not only cause a loss of picture quality, but also crop the picture as we

that aired on the network.  Please check our online schedule for replays.

4. Why can't I see the football game I want to watch in HD?

The Mtn. is producing its full schedule of 30 football games in HD and makes them available to its cable and satellite affiliates at no charge. However, carriage and channel placement is at the discretion of the respective cable and satellite service providers. If your service provider isn't providing The Mtn. in HD, please contact them and request they add it to their channel lineup.

Please note that you must also have an HD receiver and subscribe to the HD service offered by your cable or satellite service provider.

The Mtn. is available nationally on satellite provider DIRECTV and on cable systems in 28 states. Select programming is available to American servicemen and servicewomen abroad via American Forces Network (AFN). For a complete directory of providers and channel listings, visit Get The Mtn. Your provider doesn't carry The Mtn.? Let them know you want to see The Mtn. added to your channel lineup.

6. Why doesn't my cable or satellite company carry The Mtn.?

Programming decisions are made on a local or regional level by service providers. Reasons can vary from bandwidth limitation, meaning that there is simply no more physical space on which to place another channel, to a simple fact that a provider does not feel there is enough viewer interest to warrant carriage. The Mtn. is available to distributors on equitable terms which many leading large and small cable and satellite providers have agreed to. To let your provider know you want to see The Mtn., visit www.themtn.tv/getthemtn.

7. Will Dish Network ever carry The Mtn.?

Dish Network has elected not to carry The Mtn. The Mtn. remains open to continued negotiations with Dish Network, but we encourage you, as a Dish Network customer, contact them and ask them why they do not want to provide you with the programming that you want to see.

8. I am trying to play The Mtn. Challenge Game and can't log on.

You need to make sure that you've registered/setup a user name and password for The Mtn. Challenge as your themtn.tv login credentials will not work for the game. If you continue to experience problems, please contact the game vendor at support@ontherecordsports.com.

9. Why doesn't The Mtn. air all Mountain West Conference games?

Each year, The Mtn. alone has aired 30 live football games and 60-70 men's basketball games. Combined with additional carriage by CBS Sports Network and NBC Sports Network (formerly VERSUS), Mountain West Conference institutions have seen a dramatic increase of games appearing on national and regional television than in the past.

10. How are scheduling decisions made for carriage of football and basketball games?

The Mtn. is one of three Conference television partners, along with NBC Sports Network (formerly VERSUS) and CBS College Sports Network, which team together to bring more coverage of the Mountain West Conference than ever before. Each of the three television partners is contractually required to carry a certain number of games, so when a game you're looking for is not airing on The Mtn., check NBC Sports Network or CBS Sports Network. Plus, MW guidelines for kickoff times mean that three football games is the most that The Mtn. can schedule on any given Saturday.

We will be continuously working to upgrade our equipment and studio to full HD capability over the next few years. While expensive to produce, we know that HD is the best way to watch sports programming, and The Mtn. is working on avenues to expand its live game offerings in the future.

12. Why was a unique network created for the Mountain West Conference?

The Mtn. - MountainWest Sports Network was created in 2006 with you, the fan, in mind. More and more often, MWC teams were being asked by the former rights holder to play on non-traditional days, such as Wednesday and Thursday evenings and at times not conducive to the fans' schedules, in respect to both viewership and attendance at games.

The partnership formed between Comcast and then-CSTV was a first as The Mtn. debuted as the first network dedicated to a single collegiate athletic conference. The Conference, its member institutions, student-athletes and fans all benefit now thanks to games held and aired at times more convenient to fans and viewers as well as a substantial increase in rights fees over what was previously in place.

The Mtn. is jointly owned and operated by Comcast Sports Group and CBS College Sports Network.

13. How has The Mtn. affected television exposure for MWC athletics and how does it compare to other conferences?

The Mtn. offers Mountain West Conference fans more programming at more convenient times than ever before.

14. How does The Mtn. select "Olympic" sports that are covered?

When The Mtn. was created, part of its appeal was the agreement to showcase more "Olympic" sports than even before, including baseball, softball, volleyball and soccer - collegiate sports that do not receive nearly the attention or airtime as traditional revenue sports, such as football and basketball. The Mtn. feels that viewers should experience a variety of collegiate sports throughout the year and strives to carry as many events as possible.

Mountain Sports Report, presented by Dodge airs live five nights per week and showcases a variety of "Olympic" sports features and results.  In addition, the network produces a myriad of championship preview and review shows focused on "Olympic" sports. 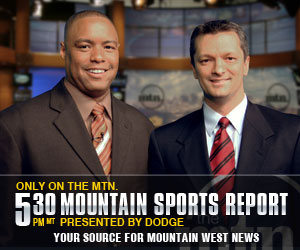 NOW PLAYING
COMING UP NEXT
ALL TIMES MOUNTAIN
The Mtn. is available nationwide on DIRECTV channel 616. Check with DIRECTV to find out if your programming package includes The Mtn.
Submit your questions to The Mtn.'s expert analysts and have them answered on-air at halftime or during Post Game Live.  CLICK HERE
Untitled Document