About The Mtn. How To Get The Mtn. Anchors Talent Our Mascot Media Affiliates Video Request

The Mtn. Launches in Atlanta, Grows Coverage in TX

The Mtn.  MountainWest Sports Network has launched on Comcast cable (XFINITY) in the Atlanta, Ga. area and is available to Suddenlink Communications customers in West Texas, including Abilene, Amarillo, Lubbock, Midland, San Angelo plus several municipalities east of the Dallas-Fort Worth area.

The Mtn. can be viewed on Comcast XFINITY digital television service in the Atlanta DMA (No. 8 in the United States) on the Sports Entertainment Package (channel 786) in areas having completed Comcasts World of More upgrades and will be available on remaining systems throughout 2011 as World of More enhancements are completed.  Visit www.xfinity.com
Network News Archive
Archived Comments 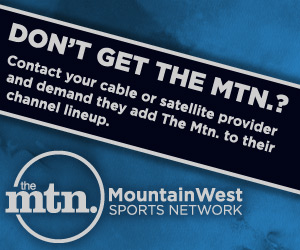